Brace yourselves Naruto fans as GameSamba brings you an officially licensed Naruto game. The latest from GameSamba is created under the supervision of Shueisha and is titled, Naruto Slugfest. It is also the first 3DMMO open-world game adapted from the Naruto universe. The characters are drawn by the original artists, ninjitsu is real, and there is a classic plot at the base of this amazing Naruto game. At the time of the announcement, the game made quite an impact. However, the delay in the development somehow put it in the backdrop. With the listing on the play store, Naruto Slugfest is once again back. While it might few more days to officially hit the shelves, you can pre-register yourselves. In the meanwhile, you can also learn to install Naruto Slugfest for PC and Laptop.

Unlike the traditional Naruto games, Naruto Slugfest has much more to offer. There is a whole new open-world which you can explore. And since it is the first 3DMMO Naruto game, expect high-end graphics. In the case of Android games, we cannot rule out the possibility of lags. Now you can get on to a high-end device to avoid such issues but that’s not feasible enough. A good option would be to play the game on PCs or Laptops. All you need is an Android Emulator and you are good to go. Once you have an Emulator set up, you can easily play Naruto Slugfest on your Windows running PC/Laptop or OS X powered Macbook/iMac. We have listed the instructions to help you out with the installation. Now before we get into that, here’s an overview of Naruto Slugfest.

A key thing that basically decides the authenticity of an anime-based game, aside from the license, is how close it is to the original plot. This is probably the strongest point of Naruto Slugfest as it is based on the classic Naruto plot. It allows the players to dive into the world of Naruto and grow with the squad 7. The characters are created by the official animators who have put in a great effort. The Leaf Village is there, the ninjitsu is pretty much similar to the original one, and a changing weather system, all these features from the classic plot take the Naruto Slugfest to a whole new level, compared to the other Naruto games. Head over to the gameplay and get to know more about the features.

Like the original Sandbox, Naruto Slugfest allows you to set out in the open-world and execute various real-time interactive events. While the plot is based on the original theme, devs have added multiple endings to make the gameplay more exciting. At a certain point in the game, you can determine your preferences, which result in different endings. Next is the character, the life of all the Naruto games. You can create the best ninja fighter as per your liking. There is a wide range of skills and customization options that you can learn and select to make an ultimate ninja fighter in Naruto Slugfest. 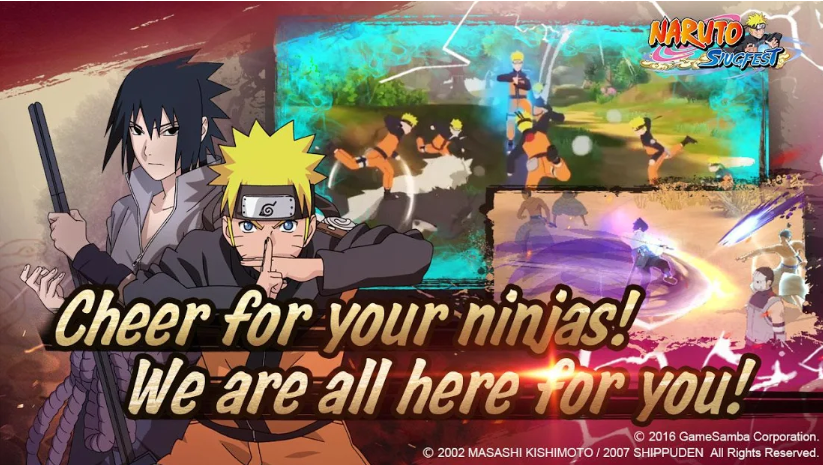 As for the battles, there are multiple game modes where you can showcase your skills. These multiple modes and quests will never let you have a dull moment in the game. All the action sequences in these modes range from easy and delightful to difficult trial challenges. To put it in simple words, you can compete in Guilds, master-disciple, team quests, and multiplayer real-time battles. If you are more into real-time battles, the exclusive 1v1 ninja competitions are simply the best.

The visuals are vivid and captivating, the whole game is created with a cartoon rendering technology with next-generation cinematography and shadow effects. In short, on the graphics side, Naruto Slugfest looks quite promising and you will have a blast. To sum it all up, Naruto Slugfest is a perfect RPG to experience the authentic Naruto game. It is listed in the play store and you can install it on your PC/Laptop following the section given below.

If you are having trouble installing Naruto Slugfest on your PC/Laptops, let us know via comments.